Who knew that a matchup between prime time Kirk Cousins and Bill Belichick would be such an offensive outburst?

But in a Thanksgiving evening classic, Cousins and the Minnesota Vikings rallied late for a 33-26 victory over the New England Patriots.

Mac Jones had just about four-and-a-half minutes to get into the end zone to keep the game alive, with the Pats trailing by seven. A long catch-and-run by Rhamondre Stevenson put the Pats on the other side of the field quickly, but a big third-down sack forced a 4th and 16. Jones was looking for Agholor deep, but it was just out of his reach, and the Vikings took over on downs.

The Pats were able to force a three-and-out and get the ball – but they had to go 89 yards in 53 seconds. Jones, though, was sacked on first down for a loss of eight. Safe to say, it was too much for New England, and the clock ran out on them, despite two more completions. 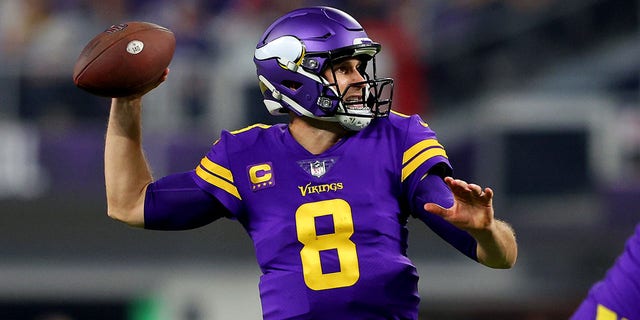 Kirk Cousins #8 of the Minnesota Vikings throws a pass against the New England Patriots during the second half at U.S. Bank Stadium on November 24, 2022 in Minneapolis, Minnesota.
(Adam Bettcher/Getty Images)

The Vikings just needed five plays to get in the end zone to start the game – and who else but Justin Jefferson – but the Pats answered right back with a 34-yard touchdown to Nelson Agholor. It was 7-7 less than seven minutes into the game.

The scoring settled down for a bit, as both teams settled for some field goals, but inside two minutes in the second quarter, T.J. Hockenson caught a touchdown to put Minnesota up 16-13 (Greg Joseph missed the ensuing PAT). But Jones was able to put the Pats on the other side of the field quickly so Nick Folk can tie the game at 16 before the half.

The Pats got the ball at the half, and Jones continued his electricity – a quick drive ended with a 37-yard touchdown to Hunter Henry, and New England had a 23-16. However, the Vikings immediately answered with a 97-yard kickoff return for a touchdown by Kene Nwqngwu to tie the game. 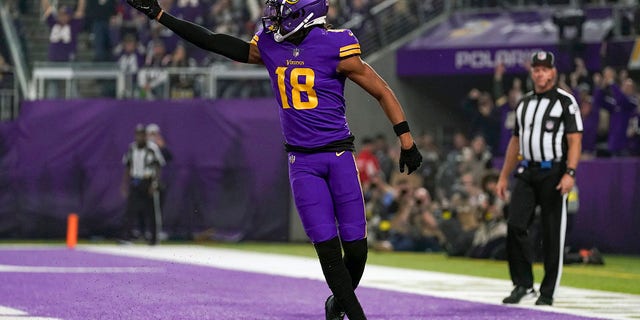 Minnesota Vikings wide receiver Justin Jefferson (18) celebrates his 6-yard touchdown reception by calling for his teammates during the first quarter of a game between the Minnesota Vikings and New England Patriots on November 24, 2022, at U.S. Bank Stadium in Minneapolis, MN.
(Nick Wosika/Icon Sportswire via Getty Images)

And what did Jones do to respond? Marched right back down the field. Henry almost caught his second touchdown of the night, but replay found he didn’t finish the catch, so the Pats settled for three. The Vikings then got inside the Pats’ 10-yard line after a long drive, but had to settle for three early in the fourth, tying the game at 26.

After a Patriots punt, the Vikings were set to punt the ball away, but a running into the kicker penalty kept their drive alive. Naturally, Cousins found Jefferson for a 36-yard gain. On the next play, he hit Old Reliable Adam Thielen in the back of the end zone to make it 33-26 Minnesota with 9:34 to go, a score which turned out to be the game-winner.

Cousins, whose prime time struggles are well-noted, was awesome in this one – he threw for 299 yards on 30-of-37 passing, throwing for three touchdowns. Jefferson’s 139 receiving yards were a game-high (he also had nine receptions), and Thielen added nine catches for 61 yards.

Jefferson also set the NFL record for most receiving yards in a player’s first three seasons, surpassing Randy Moss’ 4,163. Jefferson now has 4,248 in his career that’s spanned just 44 games. Moss put up that number in 48 games.

Jones was certainly no slouch in a losing effort, though – he threw for 382 yards through the air, completing 28 of his 39 passes without turning the ball over. Stevenson caught a team-high nine passes for 78 yards, while DeVante Parker’s 80 receiving yards led Pats receivers. 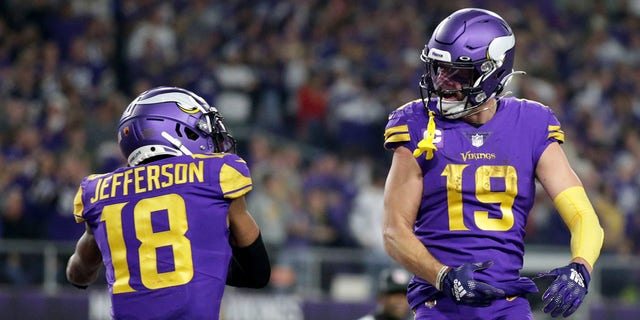