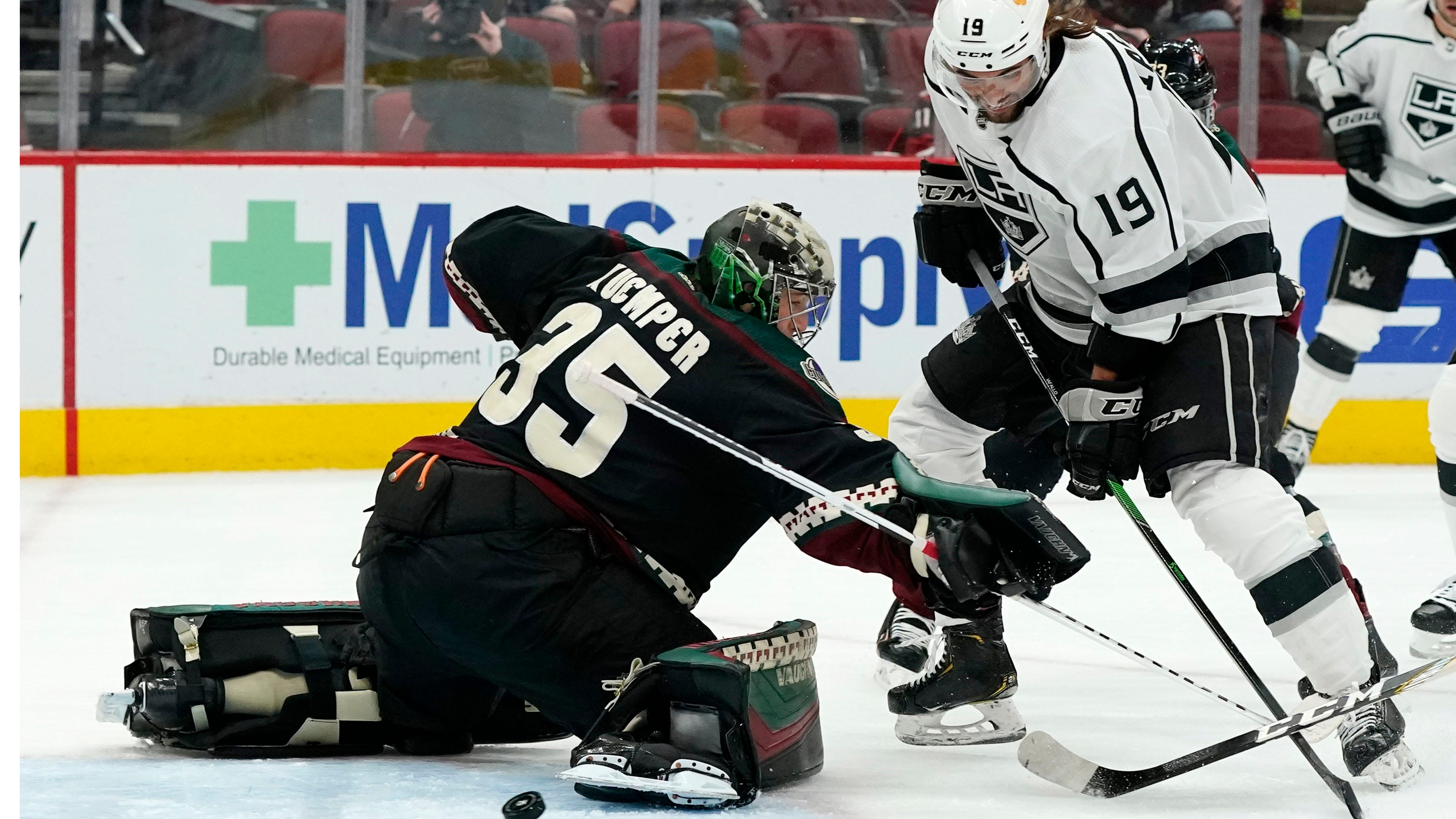 Anze Kopitar had a goal and an assist to reach 999 career points and the Los Angeles Kings put a big dent in the Arizona Coyotes’ playoff hopes with a 3-2 win Monday night.

Kopitar scored in the second period and had an assist on Alex Iafallo’s goal, putting him within one point of becoming the fourth Kings player to reach 1,000 for his career.

“It’s incredible,” Iafallo said. “To be one point away from 1,000 is an amazing accomplishment. It’s just an honor to be able to play with him.”

Trevor Moore also scored and Jonathan Quick had 17 saves before leaving after the second period with an upper-body injury. Cal Petersen stopped 15 shots and helped the Kings withstand a late flurry by the Coyotes in relief.

Jakob Chychrun scored his 17th goal, which leads all NHL defensemen, and Christian Dvorak scored for the Coyotes. Darcy Kuemper had 22 saves.

Arizona is five points behind St. Louis for the West Division’s final playoff spot with three games left after the Blues beat Anaheim earlier Monday. The Coyotes have lost 11 of 14.

“It hurts,” said Coyotes forward Conor Garland, who returned after missing six games with a lower-body injury. “We had some good looks there. We just need to find a way to get one in.”

The Coyotes got off to a slow in a 3-2 loss to Vegas on Saturday and did it again in another must-win game.

Arizona had one shot on goal in the first 15 minutes — the Kings had nine — and Kuemper had to make some difficult saves, including a diving stop on Sean Walker in the early going.

The Coyotes finally generated some offensive pressure late and Dvorak scored, gathering a pass from Lawson Crouse and knocking it past Quick with a backhander.

Moore scored 35 seconds later, beating Kuemper to the short after an Arizona faceoff win to the goalie’s right.

The Coyotes closed the period on the power play after the Kings’ Tobias Bjornfot ran Clayton Keller into Quick. Chychrun capitalized 53 seconds into the second, beating Quick from the left circle on a shot off the post.

Kopitar tied it midway through the period, one-timing a pass from Adrian Kempe past Kuemper’s stick side on a 2-on-1. Iafallo put the Kings up on a late power play, jamming in a rebound after Kuemper stopped Drew Doughty’s initial shot.

Petersen made several difficult saves in the final two minutes after Arizona pulled Kuemper for an extra attacker. The Coyotes also had a couple of good in-close chances just miss due to bouncing pucks.

McLellan shook up his lines, moving center Adrian Kempe to play with Kopitar and Dustin Brown.

It turned out to be a great move.

Kempe had an assist on Kopitar’s goal, nearly score on a shot hit the post in the third period and played a strong defensive game.

“It was one of his better games of the season,” McLellan said. “He was aggressive, he was all over the ice, set the tone on the forecheck, meshed well with those two. He’s as good defensively as he was offensively, so we’re really happy for him tonight.”

Coyotes C Nick Schmaltz was a late scratch after being injured during warm-ups.

He was hit in the head with a puck that hit the crossbar, went down to the ice and doubled over in pain before being helped to the locker room by Arizona’s trainer.

Schmaltz is one of the Coyotes’ top playmakers with 10 goals and 22 assists this season.

“I don’t know how he is. I didn’t see him after the game so I don’t know if he’ll be able to go tomorrow,” Coyotes coach Rick Tocchet said. “We have a tough time scoring as it is and Nick drives a lot of offense for us.”

Kopitar is one point shy of joining Marcel Dionne (1,307), Luc Robitaille (1,154) and Dave Taylor (1,069) in the Kings’ 1,000-point club. … Chychrun became the first player in Coyotes history tonight to score a goal, record nine shots and skate in over 28 minutes in one game. … Coyotes G Antti Raanta skated with the team Monday morning, but missed his ninth straight game with an upper-body injury.

The Kings lead the Coyotes 4-3 heading into the season series finale on Wednesday.