Porter, a firebrand progressive politician who advocates for universal health care, has several salaried individuals on her campaign payroll, Federal Election Commission records show. Those employees, however, are not receiving any health insurance coverage directly from the campaign, according to a review of the committee’s disbursements during the first quarter.

The congresswoman is a proponent of universal coverage and is a co-sponsor of a “Medicare-for-all” bill. She has said that “health care is a human right” and that she would stop at nothing to protect health care, improve it and expand it. 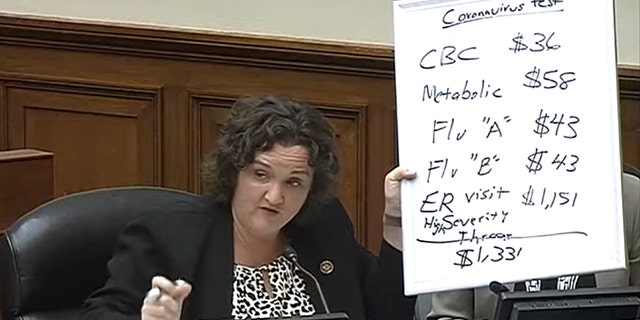 Rep. Katie Porter speaks at a House Oversight Committee hearing on the coronavirus.

Jordan Wong, communications director for Porter’s campaign, says stipends are added to employee’s paychecks. “Your assumption that ‘campaign staffers [do] not receiv[e] health insurance coverage’ is not correct,” Wong said. “Our campaign employees continue to receive stipends for health insurance. They are deposited with their salaries, on top of the agreed-upon compensation for their work.”

When asked if the stipends – which are not reported in filings – were for employees to purchase their own health insurance since it appears the campaign was not offering coverage, Wong added, “All employees, even if they are on a parent’s or spouse’s insurance, receive the same health insurance stipend from the campaign. For all of our employees, this has been more than enough to cover the full cost of their premium (and then some) for a Covered CA plan of their choice.”

This setup is identical in nature to one that had garnered attention for former South Bend, Indiana, Mayor Pete Buttigieg during the 2020 presidential cycle. Buttigieg caught flak after NBC News reported that he was the only Democratic presidential contender who had yet to offer direct health coverage to campaign workers. His campaign, like Porter’s, had instead said they were paying stipends through salaries so its staffers could purchase ObamaCare. At the time, Buttigieg’s campaign had just launched, and he later offered health care coverage.

Dozens of other Democratic politicians also report health insurance payments from their campaign’s coffers, including Reps. Eric Swalwell of California, Seth Moulton of Massachusetts, Jan Schakowsky of Illinois, and Jamie Raskin of Maryland.

While Porter now does not offer health insurance directly from her campaign, between January and December 2018 the campaign sent cash to Blue Shield for health insurance, stipends and premiums, records show.

No payments for health-related purposes are shown after that time. The campaign’s only insurance payments this year were $333.50 for workers’ compensation insurance.